While acknowledging the tremendous suffering and hardships of our current coronavirus pandemic, the City of Santa Cruz recognizes and applauds the 50th anniversary of Earth Day, this Wednesday, April 22. Since 1970, Earth Day has united us in positive actions and energy—not only throughout our community, but worldwide—to protect our environment.

Although we will not celebrate in San Lorenzo Park this year, there are virtual ways to participate in Earth Day 2020.

On April 22, 1970, 20 million Americans—10 percent of the population at the time—took to streets, college campuses, and hundreds of cities to protest environmental ignorance and demand a new way forward for our planet.

This inaugural event galvanized an unparalleled period of legislative and grassroots activity leading to the creation of the Environmental Protection Agency and passage of legislation such as the Clean Water Act, Clean Air Act and Endangered Species Act.

Photo by Markus Spiske from Pexels

Earth Day is now recognized as the largest civic event worldwide and is celebrated by thousands annually here at our local festival in San Lorenzo Park.

Earth Day’s founder was Gaylord Nelson, a U.S. Senator from Wisconsin. He was moved to action after witnessing both the ravages of the 1969 massive oil spill in Santa Barbara and actions of the student anti-war movement. He realized that if he could infuse that student energy with an emerging public consciousness about water and air pollution, it would bring environmental protection onto the national political agenda.

At our most recent City Council meeting, Mayor Justin Cummings proclaimed April 2020 as “Climate Action Month” honoring our City of Santa Cruz accomplishments in leading the effort to protect our environment.

Most recently, the City has launched the Resilient Coast Santa Cruz initiative to plan for sea level rise and recommitted our climate action efforts through adoption of Climate Emergency and Green New Deal resolutions. The City will begin its a state-of-the-art Climate and Energy Action Plan 2030 process in July to accelerate progress on decarbonization and resiliency.

We continue to receive awards and accolades for work to protect our environment. In the last two years alone these include making the 2020 Carbon Disclosure Project’s “A Cities List” for leading the transition to a climate-safe future and setting an example for others to follow, the 2019 Monterey Bay Air Resources District Clean Air Leaders Award for municipal energy efficiency, and the 2019 Institute of Local Government’s Silver Beacon Award for holistic climate action. 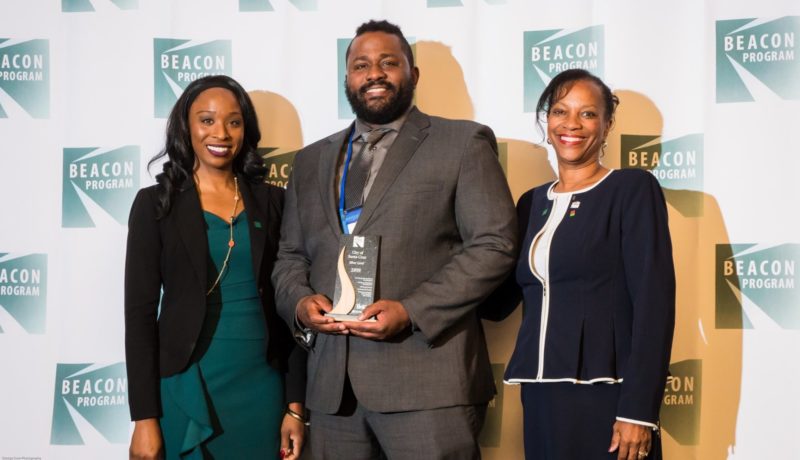 Mayor Justin Cummings accepted the 2019 Institute of Local Government’s Silver Beacon Award on behalf of the City of Santa Cruz at the League of California Cities Annual Conference & Expo on Oct. 17, 2019.

If you would like to participate in a virtual Earth Day, the Earth Day Network has created a 22 day challenge that allows us to help the planet while at home. Check it out at earthday.org/earth-day-challenge. Local environmental advocacy groups including Save Our Shores and Santa Cruz Climate Action Network are also providing virtual activities and resources for residents.