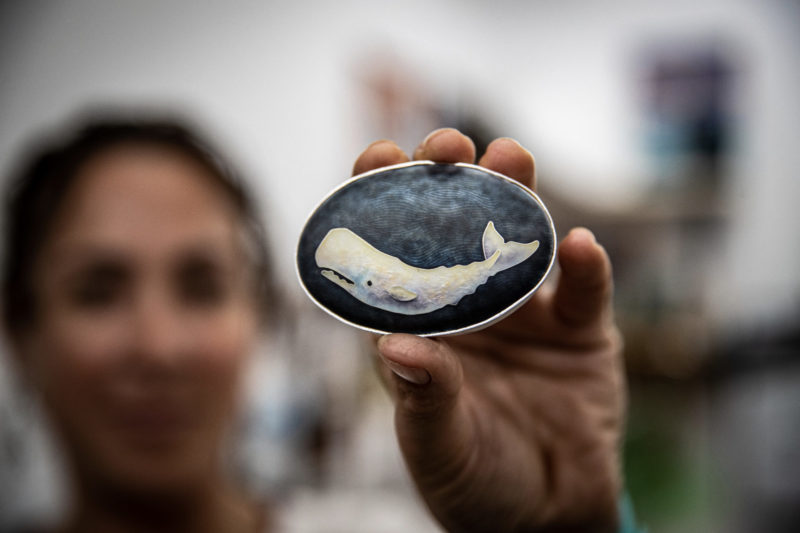 Cloisonné fabrication is a millenniums-old form of jewelry making, practiced by some of the world’s most ancient civilizations in regions such as China, Egypt, and Eastern Europe. Byzantine-era metal smiths used the technique to beautify weapons or accentuate jeweled ruby rings, and while Cloisonné is much less common among artists in modern times, there are some who are keeping the tradition alive. 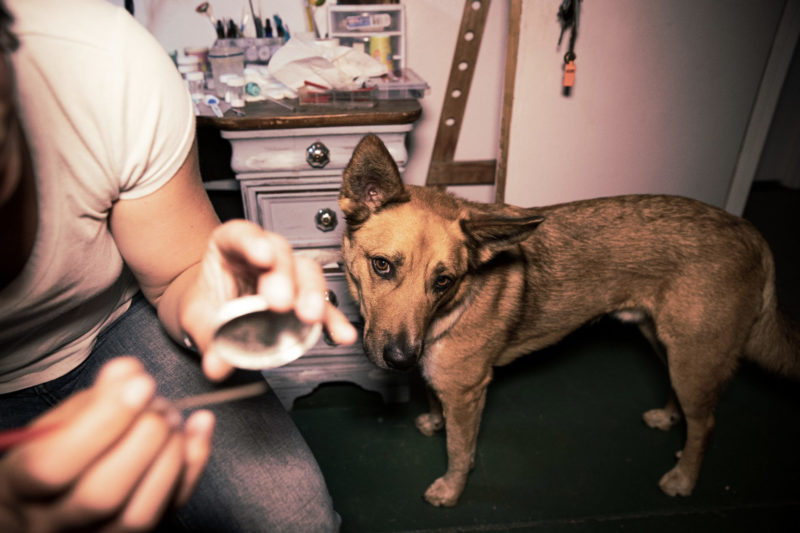 Darci Shea’s dog Ludo watches on while she works in the studio.

Among them are local artist-craftswoman Darci Shea, who designs customized, ocean-inspired Cloisonné jewelry out of her studio in the Santa Cruz Mountains. That history gives her a deep sense of connection to, and reverence for, the planet’s earliest creative metal smiths.

“It’s really interesting how far back Cloisonné can be traced,” she says, “and in the last decade or so it’s become much less common, not many people are practicing it. That’s part of the reason I wanted to help carry it on… but also because I get to mess with such cool tools and use fire.”

So what is Cloisonné? The modern term itself is derived from the French word for “partitioned,” which refers to flattened strips of metal—in Darci Shea‘s case, she uses silver—which are shaped as walls that form images. The work is process-oriented and sometimes tedious, and Darci Shea must work delicately using needle nose pliers or tweezers.

The base of a Cloisonné piece is begun with a metal “blank,” where the silver strips are welded down. Colorful, wet enamels are then added intricately into the contours, or cells, covering the blank, which form the design before being fired in a kiln at more than 1,400 degrees Fahrenheit.

The results are brilliant pieces of jewelry full of depth and iridescent color tones, defined by sterling silver wiring coursing across the surface.

Many of Darci Shea‘s pieces depict the ocean world—a jelly fish floating peacefully, an otter clutching an urchin, a crashing wave, a sperm whale tangled in the grip of a giant squid…

The artworks are small format, designed as necklace pendents, cuff links, or even belt buckles, but Darci Shea also prides herself on her enthusiasm to work with clients and bring their own visions to life. All of her custom orders begin with a conversation while she sketches down her client’s ideas.

Before she began learning Cloisonné—under the guidance of her former mentor Merry-Lee Rae of Watsonville, CA—Darci Shea worked in the field of children’s book illustration, and before that, she studied design at Savannah College of Art and Design in Georgia. Those experiences laid the foundation for her artist’s mind, but her most formative source of inspiration comes from her upbringing living aboard a sailboat, a 50-foot wooden trimaran built by her late father, Donald. When she was 12 years old, they traveled under sail down the west coast of Central America, through the Panama Canal, the Caribbean, and eventually up the East Coast of the United States, all over the course of five years. 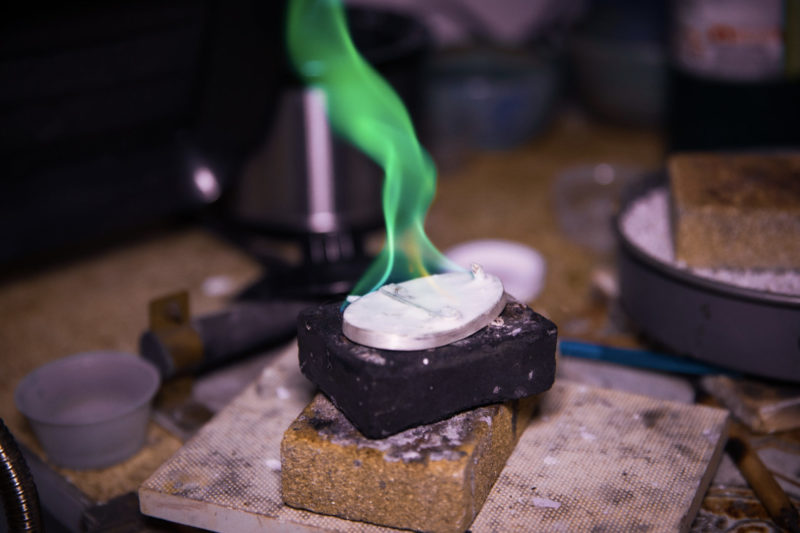 Darci Shea uses a burning process with boric acid in order to control the way the sterling silver product morphs during soldering. Burning off a layer of alcohol prevents color changes in the metals, which can occur if copper particles rise to the surface.

“I think that moving onto the boat as a child really forced me to explore my creativity, because, you know, I had to entertain myself,” she says “Entertainment was drawing, reading, and watching the natural world, the beauty of the ocean. All that time sailing and being on the ocean really informs my artwork. And I think that’s what my art is, trying to tell a story of my experiences.”

Today, in addition to her work as a Cloisonné fabricator, Darci Shea works locally in the maritime industry. With a US Coast Guard captains license, she operates sailing vessels for hire—notably Chardonnay Sailing Charters. 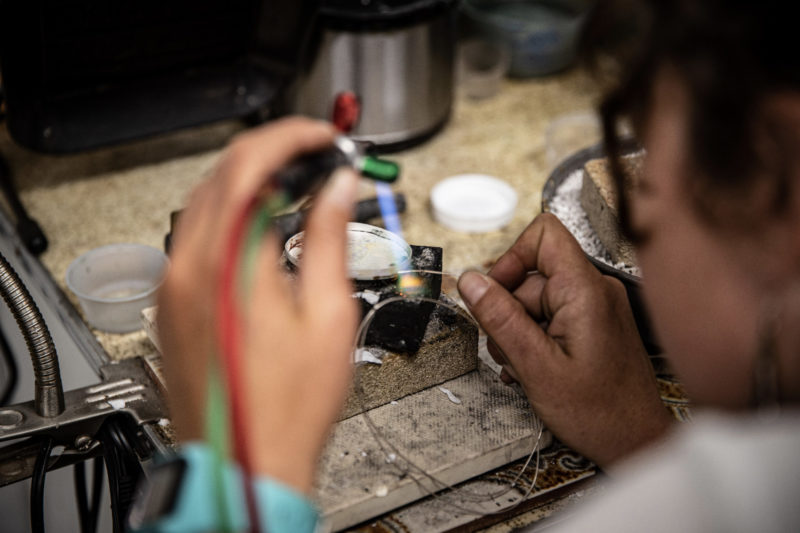 She explains that her time sailing on the ocean is like a direct feed of creativity into her Cloisonné work, and creates a good work balance between the outdoors and her work shop.

She recounts a crossing from Santa Cruz to Moss Landing aboard a local charter vessel, and from the wheelhouse she spotted a ‘Mola Mola,’ or Ocean Sunfish.

“It was this beautiful sunny day, and there was this jelly fish right next to it, and I thought, ‘I need to create a piece showing a Sunfish chasing a jelly.’ I made that and people always ask about the piece.”

Darci Shea says that there are not very many jewelers working in the Cloisonné style, and she hopes other young artists will pick up the practice.

“It’s becoming less and less common, and I really hope it doesn’t slip away from the public eye. But that’s left me working to really develop my own style, with a heavy inspiration from my time on the ocean. And that’s been incredibly rewarding.”

Reach out to Darci by clicking here to learn about custom orders for your own Cloisonné ideas.

If you are interested in learning how to make Cloisonné jewelry, reach out to Darci Shea about her online classes, currently in production. 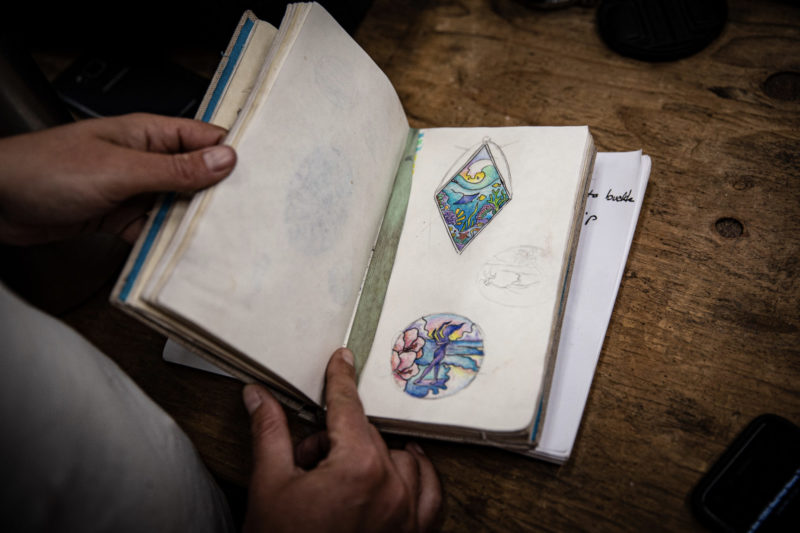 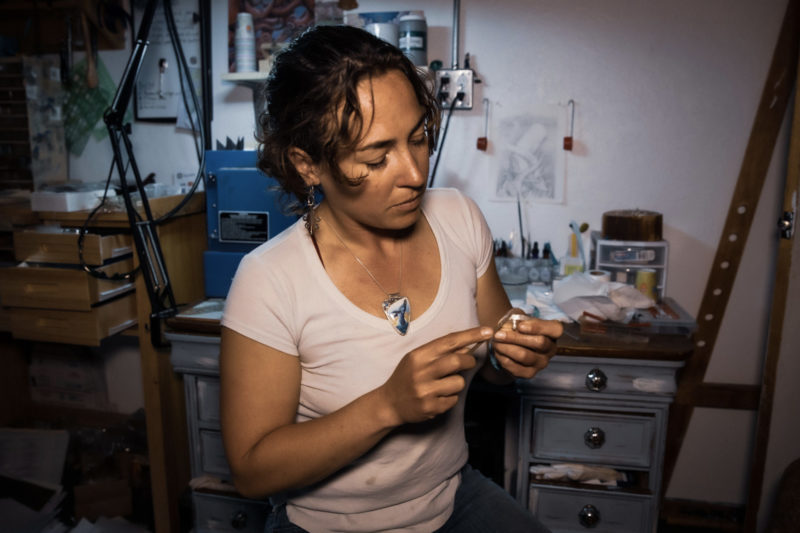 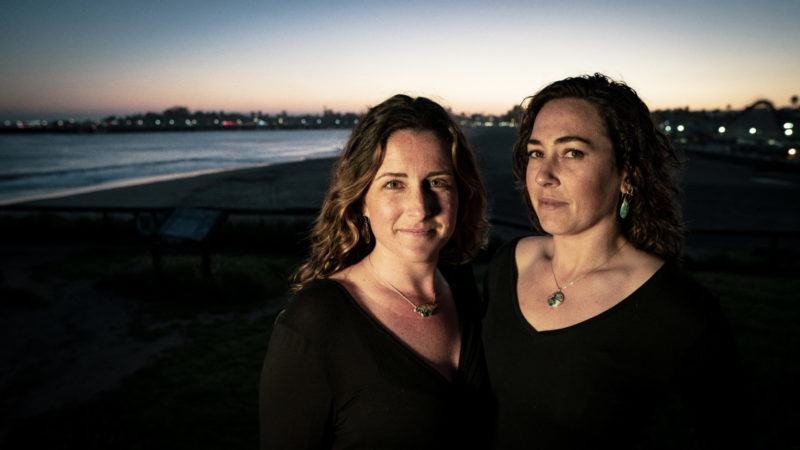 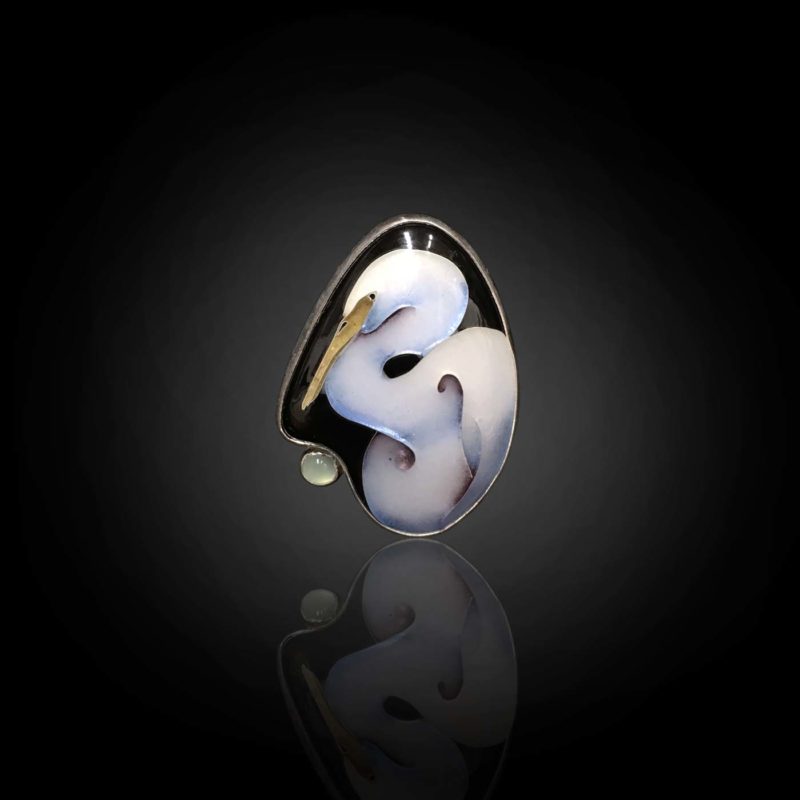 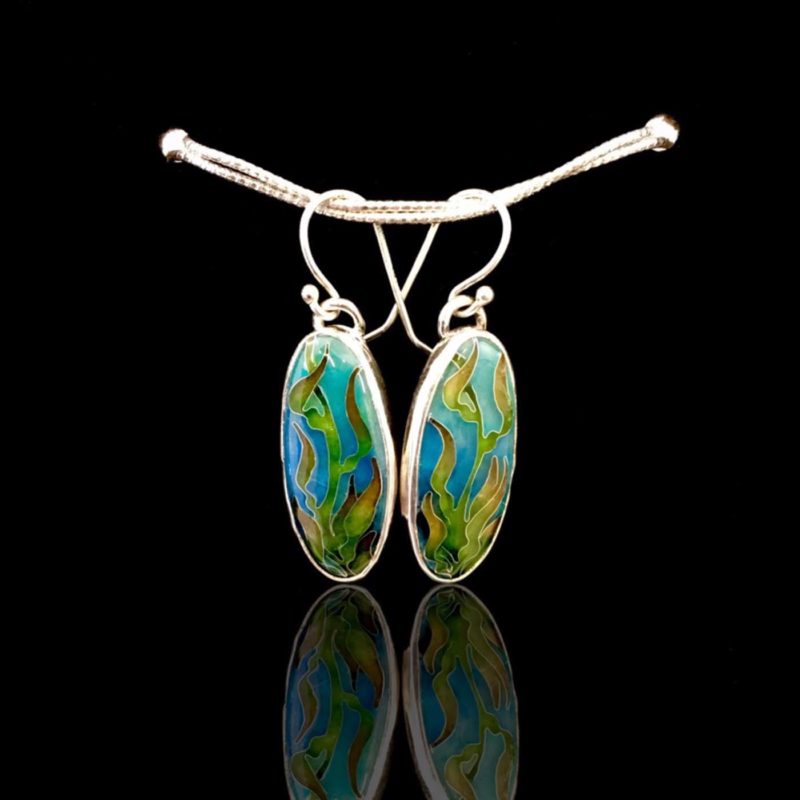 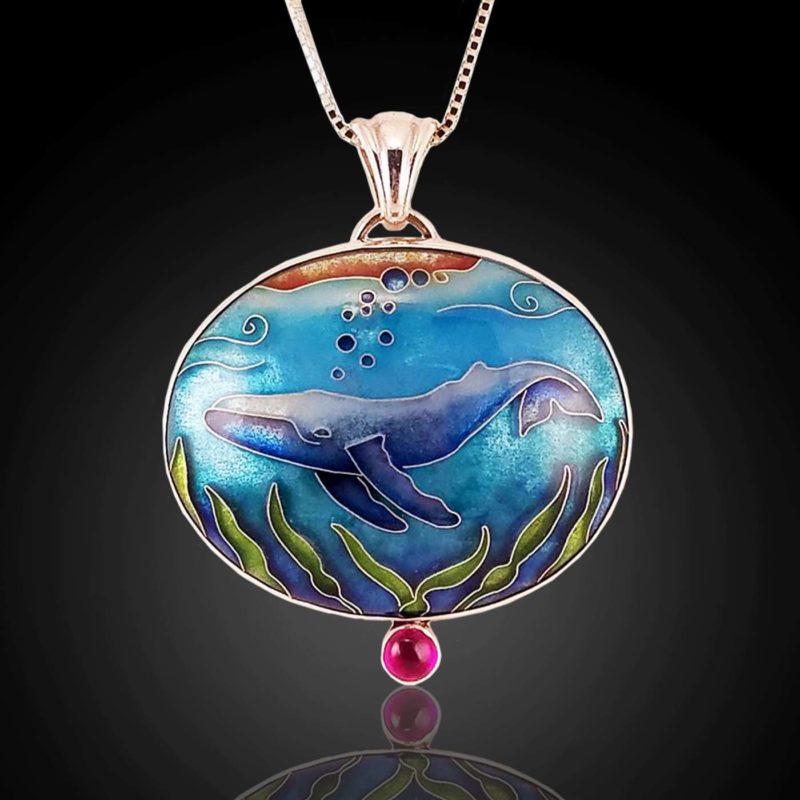 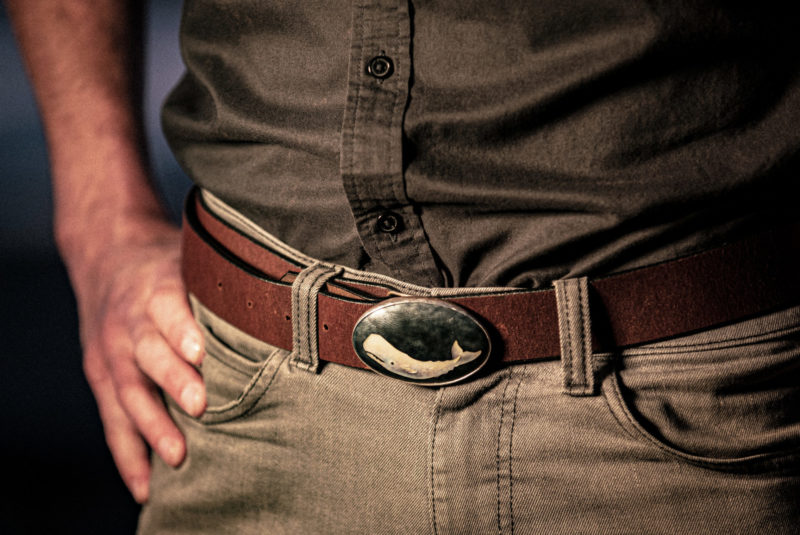 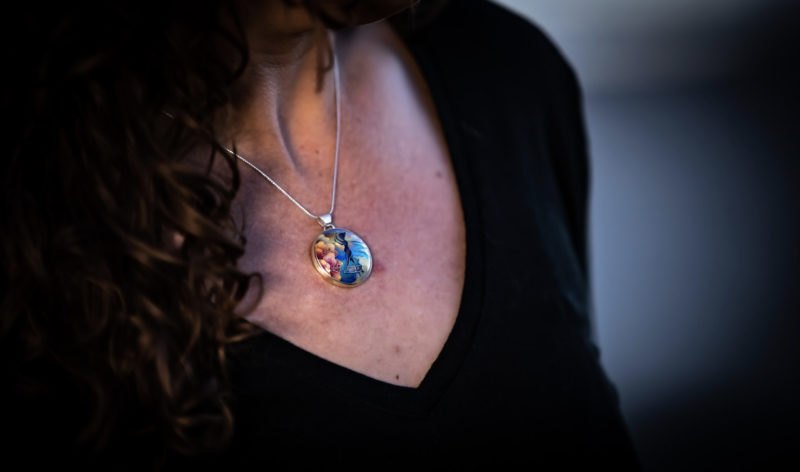 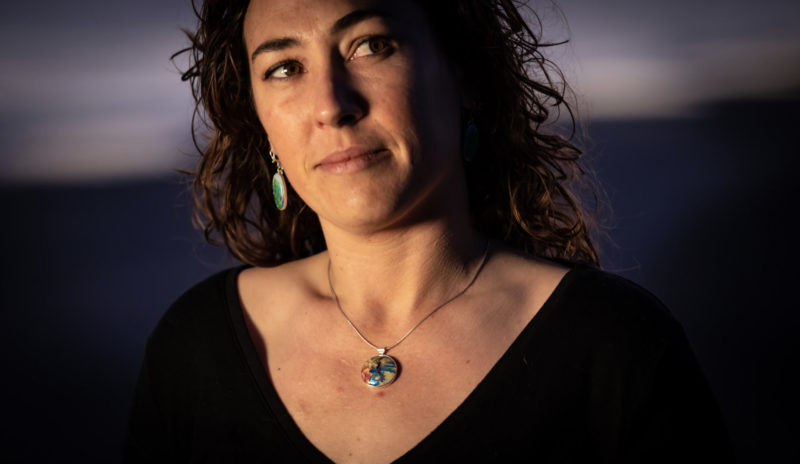