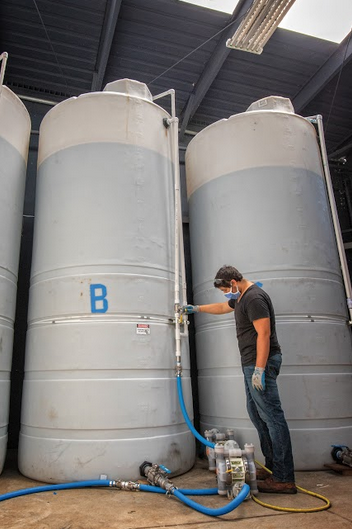 Turning organic matter into alcohol is an age-old process, but here’s what’s new: farming kelp off the California coast to clean dirty ocean water, then using a process of bio-refining to turn the kelp into biofuel. Combine that concept with an effort to cut carbon dioxide emissions by powering local school buses with plant-based fuel and David Blume says it’s a recipe for clean water and air.

“All of us would like to have a cleaner planet,” says Blume, CEO of Blume Distillation in Watsonville. Blume, along with Vice President Tom Harvey, hope to one day build biofuel plants from Seattle to Los Angeles.

The vision begins with research and testing on a country road in Watsonville, at the site of a retired rose farm, where Blume Distillation converts everything from agricultural waste to stale candy and kelp into ethanol. By 2021, they hope to have all the financing in place to start up the commercial phase of ethanol production.

Harvey originally came to Santa Cruz to save the redwood trees but, since meeting Blume in 2005, his focus has turned to renewable fuels. Harvey handles the marketing and communications, while Blume is a scientist and biosystems expert. Both are passionate ecologists. 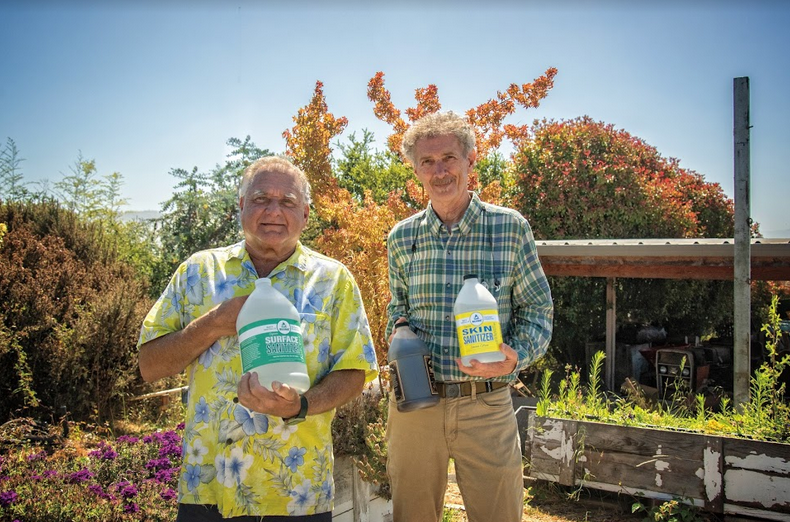 Blume and Harvey are brewing up a smorgasbord of different environmental projects and Santa Cruz County is their test site. For example, one day they would like to clean up the Gulf of Mexico, where toxic fertilizers and pollutants from the Mississippi River are forming a cesspool and creating a large “dead zone” in which marine life can’t thrive. Blume Distillation would farm kelp, then mow it and convert it into fuel.

“The kelp will lower the ocean temperature, reject oxygen and absorb all of the problematic nutrients deposited by chemical fertilizers and waste runoff from sewage treatment plants,” explains Harvey.

Blume Distillation’s goal is to use the fuel to power the super tankers that crisscross our ocean waters. Abandoned oil derricks would serve as the platform for the kelp farms, while the pipelines could transport the biofuel.

“There’s tremendous toxicity associated with the transportation of oil and gas,” says Blume, who authored the 2007 book Alcohol Can be a Gas. Blume began working on the kelp project in the Caribbean during the 1970s.

“We are interested in getting a California coastal project going—and that could be a plant in either Watsonville or Richmond—where we can demonstrate the solution,” says Harvey.

Blume Distillation works in cooperation with Whiskey Hill Farm, an organic farm located on the same property. Greenhouses left over from the rose farm now grow all kinds of plant matter for the experiments that sit next to high-tech equipment, like an alcohol hydrometer that measures the purity of the alcohol. The fermentation of plant-based waste begins with storing the organic material in tanks where it turns into alcohol mash. The distillation process separates the alcohol and water from the mash using heat. Currently, Blume Distillation is a lean operation with about 13 employees.

Watsonville city councilmember Lowell Hurst is thrilled to support efforts for a greener Central Coast. He serves on the Monterey Bay Air Resources District and is involved in a project with Blume Distillation to convert Watsonville’s waste trucks into ethanol-burning vehicles. “It’s very appropriate to have waste vehicles powered by waste,” says Hurst. 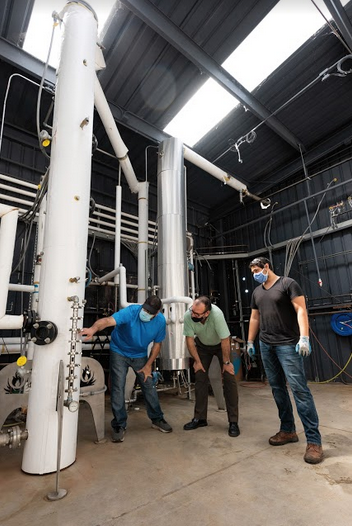 Carlo Munoz, Enrique Munoz, both Plant Engineers for Monterey Bay Renewable Fuels, and Lucky Morales, Formulation Technician for Montery Bay Renewable Fuels, look over the equipment. Product from the distillation tanks enter the stripper column (white column), which strip off the alcohol from the waste product. The product then filters through the rectifier (silver column) which further seperates the alchohol from the water content. Blume Distillation hopes to use this alcohol product to power diesel vehicles in Santa Cruz County. Photo by Jaime Boddorff

According to Harvey, the waste truck project will pave the way for bigger alternative-fuel projects like converting the large fleet of PVUSD buses from diesel to ethanol. He said once they streamline that process, Blume can also produce ethanol fuel for marine vehicles. For now, though, Blume and Harvey are working to secure a commitment to finance the test phase of the PVUSD buses that transport 8,000 students each day to school, belching out thick diesel smoke along the way.

In the spring of 2017, PVUSD entered into a partnership with Blume Distillation for a pilot program. ”The partnership would convert some buses’ liquid fuel to use locally produced near-zero emission bioethanol as diesel or gasoline replacement,” says PVUSD Superintendent Michelle Rodriguez.

To date Blume has raised over five million dollars for their research and development from private, angel and impact investors.

Learn more about what Blume is cooking up at blumedistillation.com.